Christian Falsnaes (1980) began working as a painter after studying for a degree in philosophy. Today he is mainly concerned with the participatory strategies of performance. His works are dominated by the question what it means to be a rational, perceptive human being; a human being asking himself about his attitude towards property, power, manipulation and responsibility.

He has presented his work at  Samtalekøkkenet in February 2011:

Christian Falsnaes was active in the graffiti, and squatting scene before he began his studies at the Academy of fine Arts in Vienna. He works to break down the barriers between high culture and popular culture, between visual art, film, music and literature and to create a new language in between.

In his performance Fulfilling Your Expectations, he investigates the expectations of performance and the attempts to fulfil them. In a mixture of live-performance, philosophy and music, an absurd entertainment show is created. The artist gives all, shows all and fulfil your desires.

Of all joys, the joy of expectation is indeed the biggest.

For our Now and Again serie Christian Falsnaes made the video: “Now and Then” 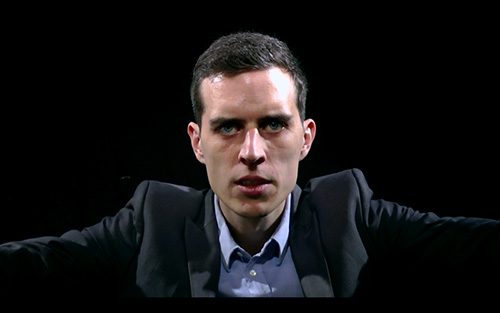 Liveart.dk was founded in 2004 in Copenhagen to promote the discussion, documentation and development of live art in Denmark. The organisation is equally inspired by the imaginative and entertaining English Live Art tradition as by the theoretical and political German theatre tradition. We have organised 10 large international festivals of Live Art for kids and adults since 2004, and over 40 discussion events, books, video series, symposia and more in the field of live art, performance art, art criticism and documentation. We collaborate with theatres, music venues, art museums and festivals in Denmark and internationally.
Se alle indlæg af liveart_dk →